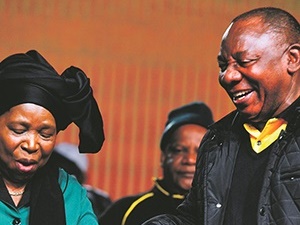 Between Ramaphosa and Dlamini-Zuma: What do we really need?

Does Ramaphosa’s list of priorities trump Dlamini-Zuma’s? No, because hers encompasses a wide variety of issues whereas his is based solely on marcroeconomic issues, writes Mohau Bosiu

From the reported numbers, there’s an indication that, after the conclusion of the ruling party’s national elective conference, Deputy President Cyril Ramaphosa will be anointed new president of the party.

However, unbridled positivity about the potential of this outcome could shutter dreams of the many who hope for such an outcome.

Opponent number one to Ramaphosa is Nkosazana Dlamini-Zuma, who, for the most part of her campaign, has aligned her programme to some of the ruling party’s resolutions, strategy and tactics, congruent with the national democratic revolution.

Deputy President Ramaphosa, assuming that he’ll emerge as president of the ANC, devised a list of priorities for his presidency.

This list has been dubbed a “new deal”, resembling former US president Franklin Roosevelt’s programme in the 1930s when the world was engulfed by the Great Depression.

Roosevelt’s new deal was a series of federal programmes; which means that sufficient constituencies, after some trade-offs, supported that programme.

To give appraisal to Ramaphosa’s new deal, necessarily one must enquire; a new deal with who?

Obviously the deal must be agreed by ANC members, then society as a whole must be mobilised to support it.

Only then can we say we have a deal.

Thus, as things still stand, a sensible conclusion is that there is no deal.

For if there was a deal, it would mean that people with similar and contending interests came together, that they, when they woke up in their different homes, picked their best dresses, suits and ties, checked the road maps, that they journeyed towards the designated address, that perhaps as they entered the conference room they found bottled cold water, juices, tea and coffee, accompanied by savouries and fruits, that they sat to discuss a projected PowerPoint presentation, and after the thank-you slide, all were clapping and smiling and before they left the room to go back to their homes, they shook hands and said: “Now we have a deal!”

This has not happened, but there is a list, a list of priorities by the deputy president, which has, strangely, been described as a new deal. What does it look like?

It is listed as follows:

2. Focus on growth and investment;

5. Accelerate the transfer of ownership and control of the economy to black South Africans;

8. Maximise the impact of infrastructure build;

9. Restore state owned enterprises as drivers of economic growth and social development; and

These are noble things one would wish to do and achieve. However, there are many policies that have already been adopted, addressing most, if not all, of these priorities.

The current programme of government is the national development plan, of which the deputy president was one of the commissioners.

This plan is currently backed up by the medium-term strategic framework 2014 – 2019, developed with this aim: “…To ensure policy coherence, alignment and coordination across government plans as well as alignment with budgeting processes.”

These include the new growth path, which sets the trajectory of economic development, the national infrastructure plan, which guides the rollout of infrastructure to improve people’s lives and enable economic growth, and the industrial policy action plan, which focuses on promoting investment and competitiveness in leading sectors and industries.

Given that these are the agreed programmes, with support from other parties in Parliament, the question that confronts us is whether the national development plan, through the current medium-term strategic framework, is being implemented as envisaged.

I think if any presidential candidate truly has the best interests of the people at heart, that candidate would do everything in their power to mobilise relevant sectors of society towards what has been agreed, to assess those programmes, reform them where need be, and buttress them to ensure seamless and expedient progress towards a national democratic society, which in current ANC speak is the so-called transition to the second phase of the national democratic revolution – emanating from the democratic revolution of 1994, which replaced the apartheid order.

What we saw with Gear – “The Government’s new economic strategy” of 1997, which was developed to back up the reconstruction and development programme, is that as the country’s economy lifted from the ashes and business was booming in leaps and bounds, jobs, on the other hand were not as forthcoming to the people as had been envisaged in Gear, and a narrative began to develop in news media – “jobless growth”.

At the heart of that conflict is that businesses were not sufficiently investing in the people, rather they fulfilled their short-term financial gains, tossing aside their communal responsibilities.

Thus, as the information and communication technology industry grew throughout the world, we missed the opportunity to be at the forefront and set the trend for this fourth industrial revolution, through development communication; a people centric approach.

To avoid such similar shortcomings, we need dynamic policy resolutions to appropriately and sustainably use the country’s resources for the benefit of the people.

Throughout her campaign, she has prioritised some issues, which she has declared as her “strategic pillars”.

They are as follows:

• Education and the skills revolution;

• Industrialisation and the fourth industrial revolution;

Like her rival in the ANC’s presidential bid, Dlamini-Zuma lists some national issues she’d like to prioritise.

The difference between the two is that Dlamini-Zuma has aligned herself with the resolutions of the ANC on radical economic transformation, while on the other hand, though not direct, but in an obscure manner, Ramaphosa tried to incline his priorities with the national development plan.

So, how is it that Ramaphosa has enjoyed popular, favourable sentiments in mainstream media than his rival?

The problem with Dlamini-Zuma is an entrenched perception of corruption and incompetence that follows her because of the people who have endorsed her candidacy, in and outside of the ANC.

What this means is that even if she was to emerge victorious from the elective conference, her run as the face of the ANC’s national elections campaign in 2019 would hurt the party.

The voters have demonstrated their disgust at state corruption by punishing the ANC in recent local elections, especially in the metros where public discourse around state officials’ alleged corruption is vibrant.

The fight for power within the ruling party is informed by the tradition that if you access power in the party, you’re well on your way to access state power and resources.

In the recent past, what we’ve observed is that this unhampered pursuit for state resources is characterised by gross negligence and corruption; as we’ve seen with the Life Esidimeni arbitration and the Public Protector’s Secure in Comfort report into Nkandla and the ultimate Constitutional Court judgement on the matter.

What this communicates is that the grinding unemployment in the country, lack of adequate education and informative centres in poor communities, and the resultant infrastructural backlog due to the bitter legacy of apartheid – sustained through exploitation of black people’s labour for enrichment of white people – has entrenched in society the common and prevailing understanding that a person must do whatever it takes to accumulate for themselves material gain, at whatever cost, and guard such material gain with heart and soul.

As a result, manifestations of crime and corruption permeate from lower margins of society right up to the highest office in the land.

This kind of crass materialistic value system, marked by conspicuous consumption, is continuing to produce an individualist society.

Rampant and rapacious is such behaviour that in the corporate sector illicit activity flourishes unchecked, as with the Steinhoff case – where billions of rands were misappropriated with impunity.

To change and reverse these ills in society, beside leadership with integrity, love for the people and multiple, requisite competencies; we need a crop of people with a sophisticated knowledge and understanding of the world. How it works. And how it should work.

Consistent with the Freedom Charter, we also need to chisel into society’s collective consciousness that the aim of education is to “teach the youth to love their people and their culture, to honour human brotherhood, liberty and peace”.

In the end, the mass of society must be able to realise their ambitions and potential in what the government does, through the state.

• Mohau Bosiu is a thought leader and communication alumnus of the Tshwane University of Technology. He writes independently.